A lot of work is going into the water mechanics in NIKRA. I wanted it to be incredibly realistic but I couldn't get it to be fast enough using the grid layout I have. I tried using individual objects for each water block but I ended up scrapping that because it was WAY too slow :(
If you want to compare it: It's like minecraft and Terraria combined. The non-infinite physics like Terraria but the blocky-ness like minecraft.
To be honest, I probably shouldn't compare myself and my game with other developers and their games. Its just that I'm not too sure what to with things like water physics or inventory layouts. I'd love to have thousands of people giving me feedback and suggestions but along with suggestions comes comments and dislikes. So I'm not too sure if I want thousands of people making assumptions about me game... gah! I don't know.

Water really shouldn't be my highest priority. But it feels like I should get it over and done with so I can continue on the story :/ once again, I don't know.

Design wise, NIKRA is going well. I have finished about 6 solar systems including names and features like seas of sand and mountains of quartz. One of my personal favourites would probably be Mexulta; its a planet almost as big as Saturn with 2 rings and 3 moons. Mexulta had unbelievable earthquakes at it's early stage of development; which resulted in massive pillars of crystal and lakes of boiling oil. The player will be able to explore this amazing planet along with the history it contains.

phew! that was a lot to write!

anyway, see you guys on the flip-side,

It has been a few days since my last update, and I must say; I've done quite a bit :)
I have fully redone the terrain generator, and now I'm putting in the cave digging code. Textures wise; I have desaturated some textures to allow me to colourize them when I want ;D This means I don't have to have many many different types of grass when I can just have 1 that can BE different types. This desaturation technique I'll probably applying to the water, and maybe the dirt. I dunno.

Here's a couple more questions I got:

Q: Will there be guns? Explosions? Destruction?!
A: More than likely! I personally LOVE destruction related games :D So, I'm probably going to add a few guns (and maybe a few cameo guns?). But things like that are final priorities.

Thank you for all the great feedback!

See you on the flip-side,
-Seth
at 3:12 pm No comments:
Email ThisBlogThis!Share to TwitterShare to FacebookShare to Pinterest

Slow. But worth it.

The past few days I've been upgrading numerous engines inside my game. They take hours, so long that I lose motivation. But, in the end, it's totally worth it :)
I overhauled the terrain generator to have biomes. But not the biomes like minecraft. These are I guess what you would call "mini biomes".
Mini biomes are things like:
"Flat"
"Hilly"
"Forest"
"Lake"
"Village"
These mini biomes change and vary depending on the planet you're on.
Now, this may suddenly start to sound like Starbound, yeah? Well, in Starbound, everything is infinite and random. I'll be revealing the story of NIKRA soon so you get an idea of what is going on in my head ;)

Anyway, that's enough for today!
Catch ya on the flip-side,
-Seth
at 8:13 pm No comments:
Email ThisBlogThis!Share to TwitterShare to FacebookShare to Pinterest

The past few days have been involving more optimisations.

I first want to talk about a comment I got on my picture I posted:
"Looks exactly like Terraria, especially that flower."

Obviously you haven't played Terraria before because my game looks nothing alike. I'm trying my hardest NOT to make my game look and act like Terraria. The end result of my game WILL be different to Terraria, it will. My game is at the stage where it could be anything!
My game is like a stem-cell, waiting to be turned into something else. Just an engine, waiting for a chassis. A brain waiting for a body.

But enough of ranting,
I would just like to say; thank you for the positive feedback on my game :) I'm so glad some of you are keen beans to play my game, but it really isn't even CLOSE to being finished ;D

Anyway,
Catch ya on the flip-side,

-Seth out
at 7:57 am 2 comments:
Email ThisBlogThis!Share to TwitterShare to FacebookShare to Pinterest

I don't have patience... xD
I know I was going to put the first photo up on Saturday but, I really just want to show people :)

Here's the first photo of NIKRA! 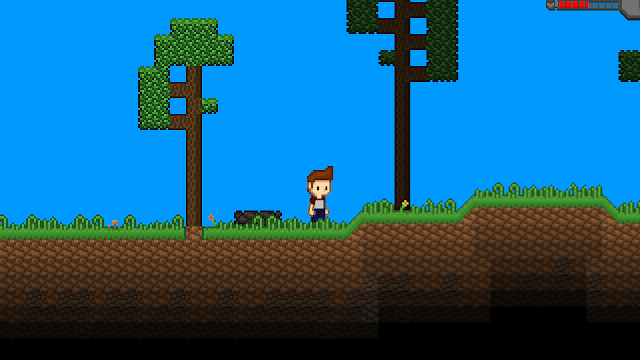 What do you think?

-Seth
at 6:22 pm No comments:
Email ThisBlogThis!Share to TwitterShare to FacebookShare to Pinterest

I figured I should do a daily update for what I did on NIKRA that day :)

Two days ago; I changed some textures and fixed some issues regarding chunk loading and background block rendering. Gained about 5 frames :D

Yesterday I spent a few hours optimising gameplay, and updated the lighting. I plan on having an option for smooth lighting but... Does it really affect the gameplay? To be honest, I quite like the blocky lighting. It suits the art in my opinion c;

Now, regarding posting images, I'm not too sure if I should just yet. The game is at a stage where it could look completely different to how it is now and, there's no point in showing something that isn't finished.

I guess I should anyway... Hmmm...
The next Q&A Saturday I'll post the first picture ;)

Well, that's all I have time for,

Catch you on the flip-side,

(IINENEA E BOHRI)
at 9:08 am No comments:
Email ThisBlogThis!Share to TwitterShare to FacebookShare to Pinterest

Look at the date! It's Q&A Saturday!

(please note that it's Saturday for me)

Here are a few questions I got:

Q: What platform is Nikra coming on?
A: Nikra is first going to be on PC, but later when its finished; I'll export it to Mac, Ubuntu, and Windows 8.

Q: What do you DO in Nikra?
A: This question is a tough one to answer... Nikra IS a sandbox game so, theoretically, there is no goal. BUT, I am aware of this, and I am working on a Story behind it. Literally. I'm writing a book called 'NIKRA: The First Galaxy', but if you mean main features? Well:
- List based inventory with realistic elements like max carry weight and holsters for tools (for quick access).
- 2D randomly generated worlds, with secrets to find and loot to steal.
- 8-bit retro art
- The ability to... hmm, I'm going to keep this one a secret c;
There is so much more planned, but I shouldn't say too much just in case I can't actually program it xP

Thank you for all your questions!

If you want a question answered, ask it in the comments section or email me at seth@endesga.com

catch you guys on the flip-side!

-Seth
at 4:56 pm No comments:
Email ThisBlogThis!Share to TwitterShare to FacebookShare to Pinterest

Why Hello there!
This is going to be a Development Blog for my upcoming game: NIKRA

I might as well introduce myself; my name is Seth, and I've been programming for 7 years. I use GM: Studio and GIMP for programming and art.
I go by the name of ENDESGA Studios, ENDESGA stands for ENtertainment DESign GAmeplay; and I've had this name for 2 years.

NIKRA is a 2D sandbox game that I've been designing for about as long as ENDESGA has been around. But even before that, I wanted a space related game. NIKRA is the name of the galaxy you're in, and you get to explore the corners of each planet. But I don't want to spoil too much because it'll ruin the fun ;)

Q: How is this game going to be different from any other 2D sandbox?
A: This game, from the earth to the inventory, aims for realism; masked with retro graphics. Animations, world generation, and item use are all realistic (without becoming impossible to program).

Q: Is it going to be over-priced like every other 2D/3D sandbox?
A: As an indie game developer, I've had a lot of history with games. My life has been filled with games. So, I know how annoying it is seeing a game you've been following for years release as a pre-release for $20USD (which is about $25 for me). I aim for the Tier 1 (get the beta) pre-order price to be about $8USD, Tier 2 (Tier 1 + you get to design an item that I'll add into the game) to be about $15USD, and Tier 3 (Tier 1+2 and name in credits) to be about $18USD.

Hopefully you check back in a few days and check this blog out again, because I'll be updating it a few times a week. (Why not bookmark it? c; )

There will be a website up sometime early 2014 (www.endesga.com), so, I will soon be announcing pre-releases/pre-orders there.

Thanks for stopping by!