NIKRA's logo was in need of an upgrade, so I sat down, drafted some ideas and after almost 2 hours, I finalized a new logo!
What do you think?

I've also made it possible to COMPLETELY design (within the game code) any type of planet. Here's a photo of Quornem, the player is also holding the 'Godblade'. I've redesigned all 13 blades of NIKRA :) 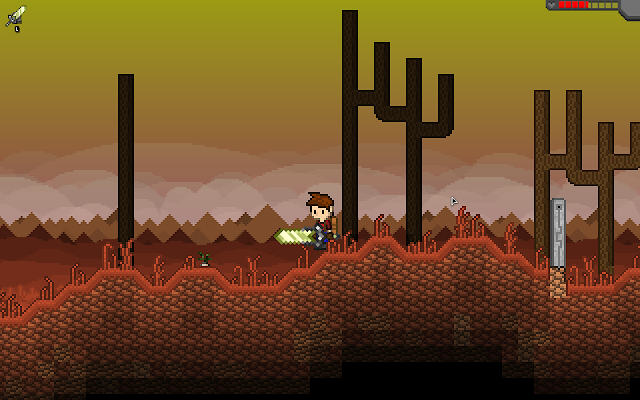 The main menu has also had a makeover. Some people asked if the planet in the background was called Nikra, so instead of explaining that it was a planet IN Nikra, I just redesigned the main menu.(But don't worry, the planet will be back somewhere in the main menu) 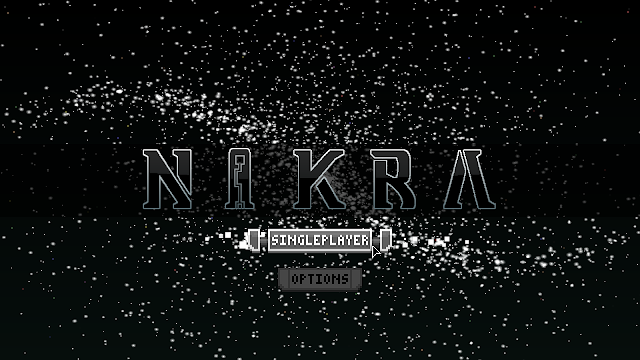 A few other things have happened. We just reached 3000+ views on this blog! We're also at 160+ likes on Facebook, and 10 favourites on Steam!


THANK YOU EVERYONE!
Until next time,
-ENDESGA Studios
at 9:41 am 8 comments:
Email ThisBlogThis!Share to TwitterShare to FacebookShare to Pinterest

Why HELLO! Seth here :)
Haven't done one of these in a while. Hopefully I answer some questions that you have in mind. The questions below are pretty much FAQ.

Q: Will NIKRA have multiplayer?
A: I've been asked this SO many times. And as honest as I can put it: I really don't know. I never really intended for NIKRA to have multiplayer, and also, I'm not too great at web-related programming. It's just one of those things you would have to put in at the START of the game development. I'm atleast 20-30% finished! and adding something like multiplayer would screw up everything.
Now, that doesn't mean there WON'T be multiplayer. I have mentioned a few times to people that I may add LAN Co-op, but even then, that's rather difficult. I guess it's just one of those topics I'll sort out after NIKRA is finished :)

Q: Is ENDESGA Studios making any other game?
A: At the moment, no, we're not. I do have some ideas that could become games but, I don't have any intention to make another game until NIKRA is finished.

Q: How do you pronounce NIKRA?
A: In the game (and story), "nikra" is the Ancientian word for "first". The Ancientian Beings cannot say 'i' (as in nickel), but instead pronounce 'i' like "eye". Therefore "nikra" is pronounced 'n-eye-kr-ah'. There are a few other words that follow certain rules, for example "Boldemo" is pronounced 'boll-deh-m-oh', and Iinenea is pronounced 'ee-nee-nee-ah'. But, to be honest, I don't really mind if people pronounce them incorrectly :)

Q: At the moment, NIKRA looks like Terraria. What's going to make it stand out?
A: Well, I personally think it's unfair to compare an unfinished game to a well-known finished game, like Terraria. NIKRA is FAR from finished. The controls, UI, inventory, and the overall gameplay is VERY different to Terraria already, and I guess it's hard for people to realise this since they can't play it yet. I think (and hope) people will see it as a different game compared to Terraria/Starbound. Also, NIKRA has a massive story which I've been writing. This story will be part of the game, but at the moment, people are just seeing the block-based terrain engine and instantly compare it to Terraria.

Q: What was something that initially got your interested in making games?
A: I can't think of a time when I didn't want to make games, I've always been interested in how games were made. When I was quite young, my father let me use his ZX Spectrum, and that was when I started programming. Over the years I played more and more games, and started learning different languages. I practiced Java, C, Basic, Python, GML, and C++. My favourite type of games are games like Pokemon, Skyrim, and Minecraft. And I guess NIKRA is like my dream game :) because it's like a Sci-Fi combination of them all. And I hope you guys will like it too :)

Hopefully that answers some questions of yours, if you have another question, either comment below, or email it to contact@endesga.com
Thank you!

Read more »
at 8:49 am 2 comments:
Email ThisBlogThis!Share to TwitterShare to FacebookShare to Pinterest

It's the 20th of April, 2012. At that time I was known as TM13, I made goomods for World of Goo and had many many design ideas.
That day I decided to enter in a competition called "Ludum Dare", apparently you had to make a finished game in 48 hours, how hard could that be?

The theme was "Tiny World", and I made a game called "Galactic Planet Protectors"

I look at this now, and I think "Wow this is really crappy". Back then it was the peak of all my acheiements. I never knew I would get to the stage of having hundreds of people looking at NIKRA, or any game of mine.

If you want to play 3 other games I made, click the link below:
http://www.ludumdare.com/compo/author/endesga/

at 9:47 am No comments:
Email ThisBlogThis!Share to TwitterShare to FacebookShare to Pinterest

Crafting on a planet in NIKRA

Hey guys!
I decided to give you another album to show you how I have crafting sorted. At the moment, its a bit rusty, and needs a bit more attention. But eventually it will be like nothing you ever used before ;)

Crafting in NIKRA involves many variables that need to be carried out. This can mean temperature of your position, the tool, the object your crafting on, the order you craft, and sometimes even the position you use one item on another!
This will give the players more of a variety when it comes to crafting, and it means they need to find and practice the perfect way to craft. This can mean building a whole forge so making ANYTHING is a breeze.

Here are some IN-DEVELOPMENT photos :)
Enjoy:


I hope you liked the demonstration!
See you soon!
-ENDESGA Studios


at 4:19 pm 4 comments:
Email ThisBlogThis!Share to TwitterShare to FacebookShare to Pinterest

Hey guys!
I just want to inform you that, when I'm not developing the game, NIKRA, I'm writing the novel of it :)
This short novel should be about 70-100 pages long and describes an adventure of two characters, Tae and Sera.

Thanks again!
See you in the next update ;)

-ENDESGA Studios
at 2:51 pm No comments:
Email ThisBlogThis!Share to TwitterShare to FacebookShare to Pinterest

Hey guys! Been a while :P
Sorry for the inactivity on my blog/Facebook, I've been very very busy with studying and preparations for my end of year exams coming up.

But, I did manage to have a small period where I could work on NIKRA, this is what I accomplished:
- Rewrote the parallax code, and tweaked things. While adding in a few more layers.
- Made the clouds in the horizon move slowly.
- Tweaked terrain generation, fixing trees and various sea related bugs.
- Added in a (very) basic physics engine
- Added 'block 32', which is a "feature block". This is a block that you can break easily and pickup what it drops. In this case, it can be pumpkins, flint ore, a stick, flax, carrots, turnips, etc.
- Numerous other bug fixes.

I'll try to update when I have the time :) thanks for waiting!

-ENDESGA Studios
at 7:35 pm 4 comments:
Email ThisBlogThis!Share to TwitterShare to FacebookShare to Pinterest

Hey everyone! Thanks again for the feedback!

I just want to inform you guys that I won't be able to work on NIKRA for about 3-5 days, for I have exams very very soon!


-Seth
at 8:55 pm No comments:
Email ThisBlogThis!Share to TwitterShare to FacebookShare to Pinterest

PHYSICS!
A basic (yet fully funtional) physics engine for particles and objects has been implemented. This physics engine I designed along time ago and hasn't failed me yet!

Until next time!
-Seth


edit: I just did a quick stress-test to see how many objects I can have at one time: 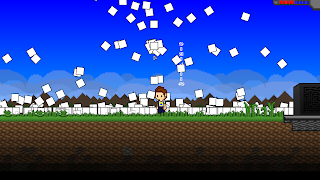 at 1:47 pm 2 comments:
Email ThisBlogThis!Share to TwitterShare to FacebookShare to Pinterest

I know its a bit late but oh well. 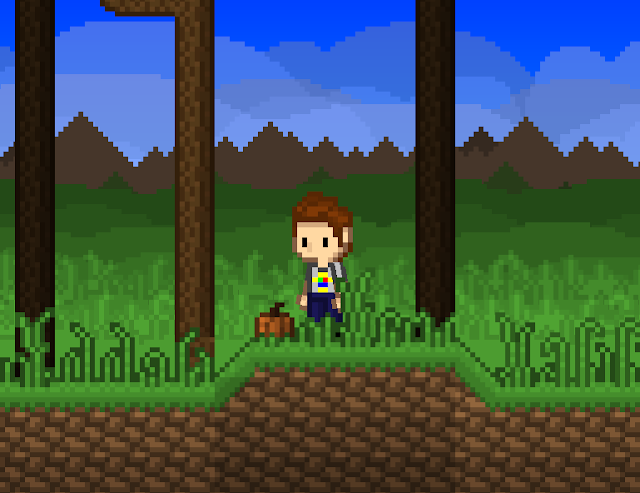 See you guys in the next update!

-Seth
at 5:26 pm No comments:
Email ThisBlogThis!Share to TwitterShare to FacebookShare to Pinterest

Thank you so much everyone! To think getting even 100 views was impossible!
870+ views!
That is truly amazing :)

On the Facebook page for NIKRA, we have 54 likes (and counting)

Also, from the 31st of Oct. till now, I've been adding in numerous scary Halloween stuff into NIKRA. Things like pumpkins, bones, and cobwebs are slowly being put in. I know it's a tad late but, I only just thought of adding those things ON Halloween xD

Anyway,
Thank you guys so much, you are all very kind :)

See you on the flip-side,
-Seth
at 10:58 am 1 comment:
Email ThisBlogThis!Share to TwitterShare to FacebookShare to Pinterest
Newer Posts Older Posts Home
Subscribe to: Posts (Atom)